Vietnam (ベトナム Betonamu) is a supporting character in the series Hetalia: Axis Powers. 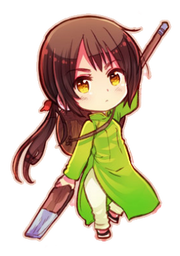 Vietnam has long, somewhat choppy dark brown hair that she wears in a low ponytail tied with a red scrap of fabric. She wears a bright green áo dài - which is the Vietnamese traditional women's clothing, and a flat, conical hat (called a nón lá) tied to her back by a string. Vietnam often carries a boat paddle.

Vietnam is described as "headstrong" due to the number of strong women in Vietnamese history. She appears a bit shy when it comes to her looks, appearing apprehensive when Taiwan wishes to take a picture with her and is uncomfortable wearing a Santa outfit in a 2009 Christmas Request. In a blog post, Himaruya mentioned that Vietnam has a natural skillfulness and uses it to create a variety of different objects, and Austria mentions in one comic that he special ordered cinnamon from Vietnam.

In the volume four strip Ilha Formosa ~Beautiful Island~, Vietnam claims that she is not photogenic. In the Christmas 2011 event, Vietnam shows that she doesn't know how to smile and requests Thailand's help.

In her new profile in chapter 376 of Hetalia: World Stars, she is described as an energetic nation with a lot of pride, and she values tradition and honour. She prefers coffee to tea and adds a lot of condensed milk to it. She is also dangerous when drunk.

Vietnam makes an official debut in 2011 with her first appearance in the manga. Her first appearance is in Volume 4, in which Taiwan took her to a photo studio, and their photos are digitally altered, causing Vietnam to be shocked by the end result.

Taiwan also invites Vietnam to a meeting about anime in Comic Birz episode 17, in which the members talk about "the feeling you have when you have a favorite anime and the voice actors get firmly associated with the characters in your head, and then there is the slightest change and you suddenly get this strange hazy feeling that something isn't right".

At the Halloween 2011 Event, Vietnam is shown winning the costume contest by wearing a giant robot costume.

At the Halloween 2013 Event, Vietnam appeared with the costume made by Taiwan and nón lá. She showed her shyness because she thought that the skirt was too short.

Vietnam appeared as a member of ASEAN following the 2021 resumption of Hetalia: World Stars. She is seen showing up to the 'casual meeting' worrying that she had dressed too informally, only to find that the other Southeast Asian nations had turned up looking more relaxed than she was.

Vietnam made a non-speaking cameo in The World Twinkle: Surprise Halloween as the winner of the costume contest in a robot costume. However, unlike in the comic, the robot was not labelled as Vietnam.

Vietnam made another non-speaking cameo in the anime of Hetalia: World Stars where she attended the world conference. She was sat next to Hungary in the audience.

In a strip in Volume 4 of the manga, Taiwan takes Vietnam to a photo studio to take pictures of themselves, Taiwan calling Vietnam "cute". At the studio, their photographs are retouched to make their eyes bigger, as this was often done. Upon receiving the photographs, Vietnam finds the retouched photos shocking, as Taiwan finds them cute.

Though Thailand and Vietnam came to the Halloween 2011 party in the same group, their main interaction has been in the Christmas 2011 event, in which a fan requested that Vietnam smile. As Vietnam asks Thailand how to smile, she notices that he wore a funny shirt, which then caused her to smile as she asked where he got it.