This is my talk page. 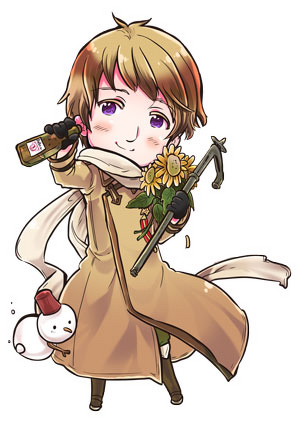 Hi, welcome to Hetalia Archives! Thanks for your edit to the User:Roseoffire page.

Thanks for the Contributions! [edit source]

Many thanks for getting a head start on adding character pages! It'll take a while to get them to their former glory, however many thanks for the assistance and contributions! Please contact me if you'd like to suggest something, have any ideas, etc.!

Yes! I'm so sorry about that... I don't know why it's locked, but I've unlocked it. I hope that helps!

Yes! Of course you can redirect them! I unlocked it~ I'm sorry so many pages are locked.... The old admins locked so many...I can't keep up. :/

Thank you for the suggestion once again, I have done so as per request. I hope this is what you had intended. Many thanks.

Haha, I know there's more than just 5 rules. I'm pretty sure not to headbutt was one of the main ones as it's like a whole new level of pain, and a new one I just made up is that you will always let me copy off your homework since I'm lazy xD. Oh, and another was to never glomp around the neck and cut off my air supply! Don't forget!

It's just that in the fandom, they're most commonly referred to as Fem!'s, while the female nations who were genderswapped become Male!'s, you know? But I can work "genderswapped" in there somewhere!

I've seen those, and I've wondered what they are. However - it is a result of what kind of text you decided to chose upon typing those letters. Aside from changing them, I don't know how to fix these font differences... I apologize for not being knowledgeable to assist you better.

I noticed your message on WonderfulAsia's talk page[edit source]

I was just thinking that in the English parts, we should probably stick with the Roman-English alphabet. The part about the "English" is that we can read it - like in romanji! But maybe you can stick it next to it in brackets or something, you know?

I apologize I did not notice that, please feel free to change that. I believe the last person who added it wanted to romanize the Cryllic for people who were not knowledgeable in the Russian language to understand. Thanks for pointing that out however.

Another thank you. [edit source]

I know I've probably said this more then I should...but thank you for your help on this wiki. Seeing you and Jazzgx work so hard brings a lot of good memories. The help means a lot. I've been going through a very tough time at the moment...hence my lack of usefulness. (I'm not ready to promote people quite yet however, please give me time). Thank you once again, and I'm working hard to get through this little phase so I can be of more assistance!

You did not talk to me first about these user changes. I'm a bit upset you just did so, please talk to me before changing user rights. I will not revert these changes however, as that's petty.

A rather late greeting[edit source]

I know this is rather late, and I apologize for that, but I'd like to say hello and acknowledge that we're all contributors of the Wiki. I don't want to be a stranger to you or Jazzgx, especially since we're all Hetalia fans here and we'll probably be working side-by-side on the Wiki. I hope that we can work on the Hetalia Wiki as a team, not just people who don't know each other. Again, I'm sorry for not making an attempt at a greeting sooner!

I think we should just go with an official/standard design, a.k.a. one drawn by Himaruya or Studio Deen that's not too old but kinda their classic look.... Like, what do you think of when you think of, say, North Italy? I think of him in his blue military outfit, so the blue military outfit design is what I selected for the profile. You know? For the profile I don't think it really matters; I just chose the chibi versions because each nation has one and they're similarly designed to one another. So, it's more systematic. I'm obsessed with systematic, you know! So that's just my opinion, though I plan to add more official art to each page as well as a small 'Gallery' section later on. But right now, I'm going to bed. So it will wait!

I don't think so... I believe Russia is normally classified as European. Do some research just to be certain!

I don't think it's necessary to put the rules directly on the first page, as it may be a bit much. I do, however, think it may be a good idea to include a link to the rules' page in the automated message whenever a new user makes an edit. This way, they're obviously there and there's really no excuse for a user not to follow/have seen them. It gives people easy access to read them, as well. But, this should be talked about, as it would really clear up some confusion when it comes to the less obvious ones.

My mistake, I agree with your decision to remove the fanart from the pages. I didn't catch that specific "no fanart on user pages" thing the first time I read the rulebook >.< Perhaps it can be broadcast around the Wikia that the fanart will be removed from use pages beforehand? Anyway, I'm sorry for the confusion!

I agree, I think that character pages should be created for every character with speaking/substantial appearances in the series. It probably wouldn't hurt to keep the character listing page though, because it probably has some information that can still be used for the pages and it provides more summarized information for each character.

I was just scrolling through the official character list and I noticed that Cyprus was listed under "Mediterranean Europe", but that's not right, because Cyprus is an Asian country. It has nothing to do with Europe.

Just wanted to let you know and perhaps you could fix it?

1. Denmark rules 2. I am new to this wiki and i need a bit of assistance. For example is it a rule that: this is not a social network. Like they have on Wikipedia? Because i used to be on Wikipedia but then i got that message amd came here instead because it had things i understand. (Dinah Kirkland (talk) 20:03, June 10, 2017 (UTC))