This is a listing of outfits worn by Turkey in Hetalia: Axis Powers. Changes made to them in other adaptations, such as the anime, are noted where applicable.

As Ottoman Empire he wears a long red coat with yellow patterns. He has the same colors for his hat which looks like a turban with a large plume on top. He has long white shirt under the coat and white, puffy trousers. He wears a black mask also that covers his whole face and black gloves.

Turkey's uniform consists of a long, dark green coat, brown pants, tall boots, and a tan scarf. He also wears a red fez and obscures his eyes with a white mask. The coat is usually colored a deep green, though it has also appeared tan, such as in the Hetalia trading card game.

These are all the outfits that Turkey has worn. Please note that this list is incomplete. Please click for larger viewing.

Turkey's outfit as the Ottoman Empire

Variation with him in a tan coat

Variation with him in a cap instead of a fez, and holding a tulip 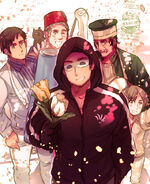 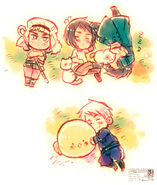 Nap time for Egypt,Greece,Turkey, and Prussia.
Add a photo to this gallery
Retrieved from "https://hetalia.fandom.com/wiki/Uniform_Guide:_Turkey?oldid=64894"
Community content is available under CC-BY-SA unless otherwise noted.