This is a listing of outfits worn by Sweden in Hetalia: Axis Powers. Changes made to them in other adaptations, such as the anime, may be noted where applicable.

Sweden wears a long, dark blue, double-breasted coat, with either a black or white shirt underneath (shown with both colors in different artworks by Himaruya), and pockets on both sides under the belt. The coat is long enough to reach his tall black boots. He is also sometimes depicted with his matching blue hat. He regularly wears his glasses.

In the manga chapter, Meeting Of The World, Sweden has a short appearance along with Finland, wearing a light green suit with a white dress shirt and dark tie. In the anime adaptation, the green was changed to a shade of blue.

With Sue and Claudius[edit | edit source]

In this blog post, Sweden's wearing a light-coloured trench coat over a violet turtleneck.

These are all the outfits that Sweden has worn. Please note that this list is incomplete. Please click for larger viewing.

Sweden in his usual military uniform, with black shirt under his coat.

Sweden's first appearance in the anime, wearing a casual outfit.

A detailed picture of Sweden's Uniform.

Sweden's chibi form, shown with his hat and white shirt under his coat.

Sweden in a sketch from volume 3. 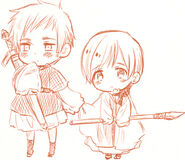 Sweden as a kid, with Finland. 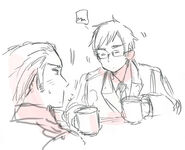 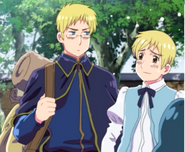 Add a photo to this gallery
Retrieved from "https://hetalia.fandom.com/wiki/Uniform_Guide:_Sweden?oldid=64888"
Community content is available under CC-BY-SA unless otherwise noted.