This is a listing of outfits worn by South Korea in Hetalia: Axis Powers.

South Korea is usually shown wearing a hanbok that appears to be an unusual hybrid of both the male and female styles (due to the way it is drawn). His jeogori appears to be in two pieces rather than one, with the center part colored navy blue while the rest is white. His baji are also white.

In a design that ultimately went unused for the anime adaptation, the navy blue part of his jeogori was colored violet and his baji appeared to be a light lavender.

In a sketch featuring South Korea with Japan, he was shown to wear a military uniform as well, though its details are not too clear. It appears to have 3/4-length sleeves, and he seems to wear gauze wraps around his legs much like China and Spain have.

Though he does not appear in the demo or screenplay for the game, South Korea does appear in concept art in a school uniform (for the Asia Class). It differs from the standard boys uniform in that the primary color is black (rather than blue), and has its own style. He wears a black jacket with red trim and oversized sleeves, a white shirt, and long black trousers with black shoes.

He also appears in this uniform in the Asia Academy strips.

These are all the outfits that South Korea has worn. Please note that this list is incomplete. Please click for larger viewing.

In a military uniform.

A sketch of his hanbok. 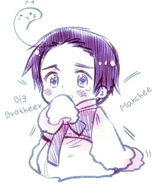 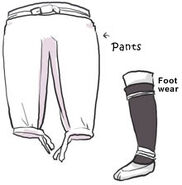 Second half of South Korea's outfit 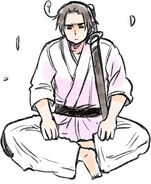 Add a photo to this gallery
Retrieved from "https://hetalia.fandom.com/wiki/Uniform_Guide:_South_Korea?oldid=55956"
Community content is available under CC-BY-SA unless otherwise noted.