This is a listing of the outfits worn by Russia in Hetalia: Axis Powers. Changes made to them in other adaptations, such as the anime, are noted where applicable.

Though there have not been many strips featuring Russia in this time period, he has made a few appearances in uniform, most notably in Bloody Sunday 1905, a strip taking place pre-WWI. Another instance shows him ambushed by Germany in a WWI strip in Hetalia: Axis Powers volume 1 (which was skipped over in the anime adaptation).

In strips taking place around the WWII period, Russia wears a long tan coat (based on a Red Army overcoat, but with the colors reversed), brown trousers, tall boots, and his trademark scarf once more. In earlier strips and artwork, a red star emblem could be seen on the right shoulder of the coat, but it disappeared over time. He also wears a medal on the coat.

The anime has confusingly depicted Russia in this outfit in segments meant to take place in modern times, with him having worn his common clothes in the original equivalent strips of the manga.

He also appears to wear this uniform in the original :) In The World, contrary to most of the other characters who wear different clothes for the winter.

When not in uniform, Russia wears a white dress shirt with a short-waisted blue jacket and gray pants. He also wears a neckbow under his scarf.

When shown at meetings, such as in Meeting Of The World, Russia wears a white hooded jacket over a brown sweater vest, white dress shirt, red tie, and dark pants. Most notably, he is not shown wearing his scarf in that instance.

In the prototype webcomic strip however, he wears a simple light-colored suit with his scarf over it.

In Academy Hetalia Christmas, Russia appears wearing the standard boys' winter uniform: a deep blue blazer over a tan sweater vest, white dress shirt, and black tie, with blue plaid pants. He wears his scarf with this outfit as well.

In the Halloween 2010 Strips, Russia is seen wearing what appears to be a pink bear outfit. The outfit is a baby pink colour and consists of a long coat, slightly longer than his usual coat, a waist-coat, a cravat and oddly enough a collar around his neck.

Although he has been seen without his scarf, he claimed it to be "a body part" in his character CD. In volume 4 of the manga, it is shown that Russia can control his scarf as though it were an individual limb (as he used it to try and strangle America).

These are all the outfits that Russia has worn. Please note that this list is incomplete. Please click for larger viewing. 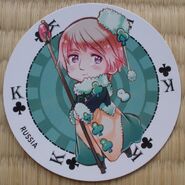 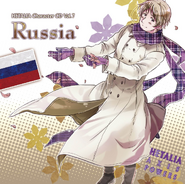 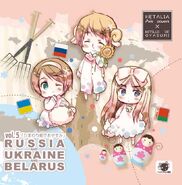 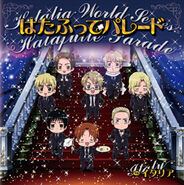 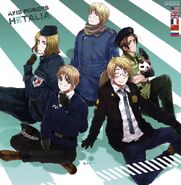 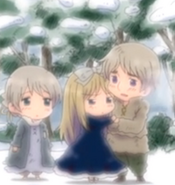 Russia when he was younger with his sisters. 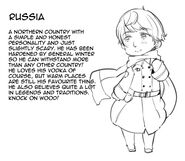 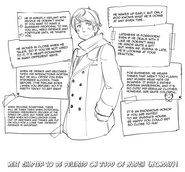 Some info on Russia 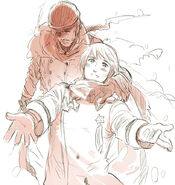 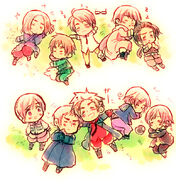 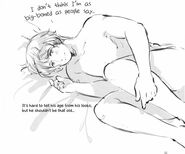 Russia saying he isn't as "big-boned" as people think.

Russia saying what he dreams to Lithuania

America and Russia getting along in a World Star comic 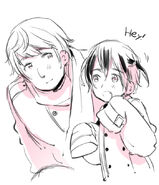 Russia giving Spain a ride on his shoulders

Russia hoping England can turn everyone into children so they can all be friends. 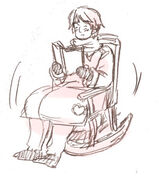 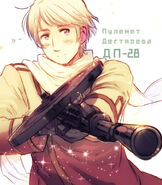 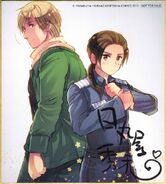 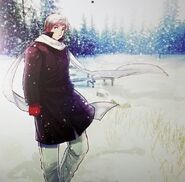 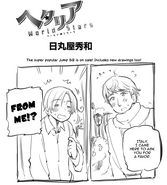 Russia and Italy part one 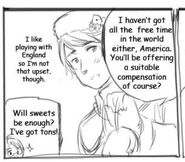 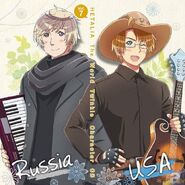 Add a photo to this gallery
Retrieved from "https://hetalia.fandom.com/wiki/Uniform_Guide:_Russia?oldid=56791"
Community content is available under CC-BY-SA unless otherwise noted.