This is a listing of the outfits worn by Poland in Hetalia: Axis Powers. Changes made to them in other adaptations, such as the anime, are noted where applicable.

In earlier artwork, Poland was depicted in a green jacket with 3/4-length sleeves, green breeches, and tall tan boots, with a green hat as an accessory. Two notable pieces of artwork with this uniform are an early Polonia sketch and his first profile image.

It appears that Himaruya may have possibly ditched this uniform in favor of the later one, though a "chibi" version of Poland appears this way in the anime ending sequence.

This uniform is practically similar to the first, except that Poland wears green capelet over his jacket and appears to have black spats over his boots. He also wears black gloves.

An earlier unused color scheme exists for the uniform, where it is colored blue instead of green. Though Poland has appeared in this uniform in most merchandise, he has yet to actually wear either military uniform in-series.

On the cover of Hetalia: Sound World, Poland's uniform is colored tan and missing its capelet, presumably due to an artist error.

In some strips, Poland wears a simple dress shirt and slacks when not in any sort of uniform. The anime depicts his shirt as being pink, while the slacks are a deep gray.

Though he does not appear in the demo or the unfinished screenplay, Poland appears alongside Lithuania in concept art. He is shown wearing the winter uniform with a blue sweater, though as he is cut off at the waist, there is debate as to whether he wears pants or a skirt with the uniform (though he appears to have his hands in pockets).

In a gag doodle drawn at the end of Checkmating Poland (as well as a "chibi" illustration), Poland is shown wearing the school uniform with a skirt, along with hairclips. In the chibi illustration, he also seems to be wearing Mary Jane-style shoes.

Poland has also been shown to occasionally cross-dress, including the aforementioned sketch of him in a girls' uniform. This aspect of his character has become very well-known, although he technicallly has not appeared enough for it to be a continuous running gag.

In the first Halloween comic, Poland appears in a sleeveless maid dress and wears a bow in his hair. Due to the comic being in black and white sketches, it is unknown what color the dress might be. However, in the bonus Halloween World Series episode, it is depicted as being pink with black trimming.

He later appears in the deleted follow-up to the 2007 Christmas event, wearing a skimpy Santa-style outfit. It consists of a Santa hat, gloves that go past the elbow with white fur trim, a tank top with a white rabbit-head accent (and what appears to be a white pom-pom), and suspenders attached to a skirt with two rabbit-heads on it. It can be assumed that the entire outfit is red and white, to go with the Christmas theme.

In the Cold Collection blog update, Poland is in a baby blue trench coat with cat paws underneath the collar, a belt and a lining of buttons raging from many patterns with an addition of smiles. His winter wear is paired with a white scarf and a pair of white cotton gloves.

These are all the outfits that Poland has worn. Please note that this list is incomplete. Please click for larger viewing.

Poland in the Cold update. 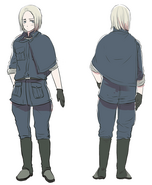 Poland in a long-caped uniform.

A sketch of Poland in traditional clothing.

Add a photo to this gallery
Retrieved from "https://hetalia.fandom.com/wiki/Uniform_Guide:_Poland?oldid=64830"
Community content is available under CC-BY-SA unless otherwise noted.