This is a listing of outfits worn by Lithuania in Hetalia: Axis Powers. Changes made to them in other adaptations, such as the anime, are noted where applicable.

Lithuania often appears wearing this uniform in strips set around the time of WWII. He wears a green jacket and pants, a white shirt and green tie, and brown shoes. In earlier illustrations, his jacket had an emblem on the left shoulder and he wore tall boots (with his pants tucked in).

His uniform in the anime is based on the later one, other than having tall boots like his original design. He also appears wearing boots in a sketch in the special edition booklet for volume 2.

When dressed for the meeting in the strip Meeting Of The World, Lithuania wore a green sweater over a white dress shirt and green tie, and dark pants.

But in the prototype version of the story, he wore a light-colored suit and had his hair tied back into a ponytail.

Lithuania appears in both concept art and the screenplay for the game. His uniform, as shown in the concept art, is the standard boys' winter uniform with a tan-colored sweater.

In the Cold Collection blog update featuring some nations in winter clothing, Lithuania is shown wearing a baby blue winter jacket with a white scarf draped over his neck. He also adorn a pair of grey leather gloves.

These are all the outfits that Lithuania has worn. Please note that this list is incomplete. Please click for larger viewing.

Lithuania in the It's Cold Bamboo Thicket update.

A sketch of Lithuania from the volume 2 booklet.

Lithuania in casual clothing from the anime. 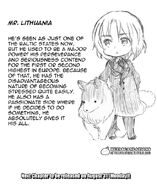 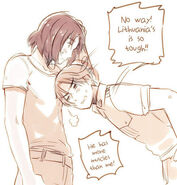 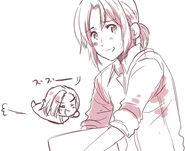 him and Russia's sisters 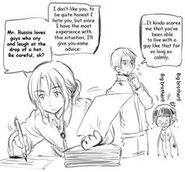 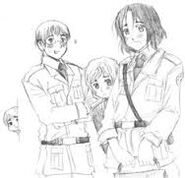 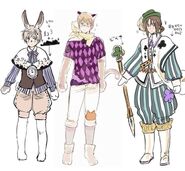 Baltics halloween outfits (Latvia,Estonia, and Lithuania)
Add a photo to this gallery
Retrieved from "https://hetalia.fandom.com/wiki/Uniform_Guide:_Lithuania?oldid=64840"
Community content is available under CC-BY-SA unless otherwise noted.