This is a listing of outfits worn by Hungary in Hetalia: Axis Powers. Changes made to them in other adaptations, such as the anime, are noted where applicable.

As a child[edit | edit source]

In her early youth, Hungary was shown to wear a simple long tunic. She has only appeared this way in a few sketches so far, including one that depicts her being picked on by the younger Ottoman Empire (Turkey) and The Golden Horde. It is also shown that the type of weapon she used at the time was a bow.

In Prussia's diary segments, a slightly-older Hungary was shown, and believed herself to be a boy. She wore her hair tied back into a ponytail, and dressed in a more medieval style. She had also switched to using a sword as her weapon.

At some point later in time, Hungary realized that she was actually female and switched to wearing a dress instead of her more masculine clothes. She is shown this way in sketches that were done for the special edition booklet of Hetalia: Axis Powers volume 2.

In this design, she wears a dark-colored dress with an apron (which has a tricolored top and a white bottom), a necklace, and a headscarf with a flower on it. The design was somewhat recycled for Hungary's appearance in Episode 48 of the anime (while in the manga Hungary had worn her usual maid dress). In the episode, the dress is given a black bodice and an orange skirt, much like the color scheme used for her other dress in the anime.

While living in Holy Roman Empire's household, as well as in other instances where she is dressed casually, Hungary is shown to wear a green maid dress with a white apron and headscarf. She initially wore a short-sleeved version, though she switched to wearing one with long sleeves in her later appearances. There is also a variation without a headscarf (Cat's Festival, Big Brother France and the Frying Pan, Hungary and her Maiden's Heart).

In the anime, the short-sleeved version of her dress is instead given a black bodice and an orange skirt, while her headscarf is colored a pale yellow. The long-sleeved version was also given a different color scheme, with the bodice being a pale yellow and the skirt being a deep green. Her apron was also colored pink, rather than white.

Hungary's choice of uniform is a long-sleeved teal-green jacket, with matching breeches and hat. She wears a pair of tall brown boots with white cuffs, and dark gloves. In artwork of her in uniform, she wields her frying pan.

But in a strange instance, her uniform was colored blue on the cover to Hetalia: Sound World, with her hat being colored white.

Though Hungary did not appear in the demo of the game, she is mentioned in the screenplay and appears in two concept sketches, wearing a school uniform. She also appears briefly in a cameo in Noto-sama 5, undressing in her room as Prussia spies on her.

In the first sketch, she wears a skirt jumper with a tie and long-sleeved blouse underneath. While this design of her was unfinished and uncolored, it can be assumed that her jumper is red and the tie is black, as the girls' uniform appears in those colors in concept art.

Another design shows Hungary in a sweater and skirt, with a tie and blouse worn underneath the sweater. She also wears long stockings and "Mary Jane" shoes.

These are all the outfits that Hungary has worn. Please note that this list is incomplete. Please click for larger viewing.

Hungary in her military uniform. One of her more iconic outfits.

A variation of her military uniform shown with high heeled boots.

A younger Hungary in traditional clothing, done for the "Children's Day" art series. 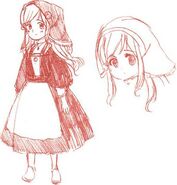 A slightly older Hungary. Probably from the days she lived with Austria, Holy Roman Empire and Chibitalia.

Hungary as a child. Here she is being bullied by the Ottoman Empire (Turkey) and Mongolia. 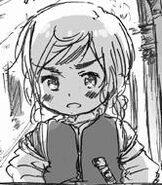 A young Hungary as a warrior.

An unfinished sketch of Hungary wearing the Gakuen Hetalia uniform.

A younger Hungary in an outfit from Volume 3 of the Hetalia manga. 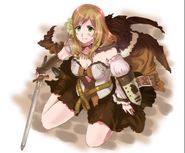 Hungary depicted in a sort of warrior outfit.

Hungary, Ukraine, and Liechtenstein having a friendly chat in Hetalia: The Beautiful World.

Hungary in her nightwear.

Maid Hungary from the anime.

Japan, Italy, and Hungary in their 2010 Halloween Costume.

Hungary's reaction to Prussia being pulled through a window.

Add a photo to this gallery
Retrieved from "https://hetalia.fandom.com/wiki/Uniform_Guide:_Hungary?oldid=64863"
Community content is available under CC-BY-SA unless otherwise noted.