This is a listing of outfits worn by Greece in Hetalia: Axis Powers. Changes made to them in other adaptations, such as the anime, are noted where applicable.

Greece is usually depicted wearing a white T-shirt, with a light brown jacket and pants. He often wears the jacket slung over his shoulders, not bothering to put it on all the way. He also wears a dark brown hat.

In early artwork featuring this outfit, he wore tall boots with white cuffs, though Himaruya later changed them to simple shoes.

In the anime adaptation, his hat was changed from brown to white.

Greece appears in the story Meeting Of The World, mostly sleeping during the meeting. He wears a tan jacket and pants, with a white dress shirt left unbuttoned.

In the prototype version of the story, he wears a basic suit and tie like most of the other characters.

These are all the outfits that Greece has worn. Please note that this list is incomplete. Please click for larger viewing.

A b/w sketch of Greece in uniform.

A full body design of Greece from the anime. 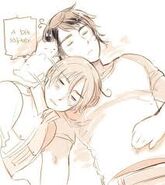 Add a photo to this gallery
Retrieved from "https://hetalia.fandom.com/wiki/Uniform_Guide:_Greece?oldid=63610"
Community content is available under CC-BY-SA unless otherwise noted.