This is a listing of outfits worn by France in Hetalia: Axis Powers. Changes made to them in other adaptations, such as the anime, are noted where applicable.

The younger version of France has appeared in assorted flashback strips, most notably in Chibitalia and Medieval England's Clothes And Hair. He also appeared as a smaller child at the beginning of the Chibitalia strips, when shown alongside with Italy and Holy Roman Empire. In that instance, his hair was much shorter and he dressed in a white nightshirt.

In his other appearances in Chibitalia, the younger France wore a red hat and cape with gold trim, in addition to a matching jacket with gold cuffs. He also wore a white cravat, and a pair of breeches with tights. However, in official art outside of the strips, his cape was drawn somewhat shorter.

Another design of France (shown in a special edition booklet for Hetalia Axis Powers: volume 2) depicts him wearing a slightly-different outfit, with a shorter cape and a different style of hat and jacket.

In his anime appearances, the younger France's clothes were changed from red to blue, to match up with the color of clothing he wore as an adult.

When he appeared in Medieval England's Clothes And Hair, the teenage France was first shown to wear a long tunic, pants, and a capelet. But after the style of fashion changed in his home, he switched to wearing a much longer and frillier tunic with oversized sleeves.

In the World War II-era strips, France is shown to wear a long, deep blue coat with a matching capelet worn over it. He also wears a pair of red pants and tall boots with white cuffs. In his early appearances in the strips, his pants were drawn more like wide breeches and he wore white spats over his boots.

But as his elaborate uniform drew the attention of V2 rockets, he was shown in one strip to have switched to a more generic military uniform with a helmet and protruding epaulets. This design also appeared in a headshot sketch.

When dressed for world meetings, France wears a white suit with a red dress shirt and tie. He appears this way in Meeting Of The World in volume 1 of the published manga, as well as in segments that have to do with the G8.

In the prototype version of the meeting story, he wears a simple suit and tie.

In the Gakuen Hetalia game, France is shown to wear a blue blazer with a white dress shirt and blue plaid pants underneath. Unlike most of the other male students, he does not wear a sweater or a tie with his uniform, and leaves his shirt slightly unbuttoned.

However, in his appearance in Academy Hetalia Christmas (in both the manga and anime), he wears a tan sweater vest over his dress shirt, along with a black tie. The school crest is also absent from his blazer.

In :) In The World, France wore a long double-breasted winter coat with a sash around the waist, in addition to a dark turtleneck and trousers. Though this outfit did not appear in the actual anime (as the setting was changed to an island), an illustration done for the 2010 Hetalia calendar shows the coat to be orange and the trousers to be pink.

These are all the outfits that France has worn. Please note that this list is incomplete. Please click for larger viewing. 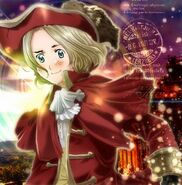 Another version from the volume 2 booklet.

A drawing of France wearing his uniform from the movie.

Young France in the anime.

France in his Gakuen uniform in the anime.

France in his 2010 Halloween Costume

France's design for The Beautiful World

France's clothing during the post-credits of Episode 67. 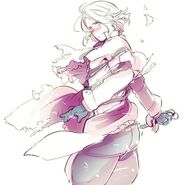 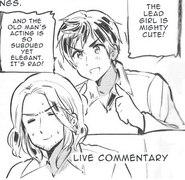 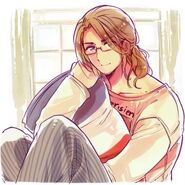