This is a listing of outfits worn by England in Hetalia: Axis Powers. Changes made to them in other adaptations, such as the anime, are noted where applicable.

England's choice of uniform is a green jacket, green trousers, a light green shirt and deep green tie, and deep brown boots. A Sam Browne belt with a strap that loops over his right shoulder (under an epaulette).

England wears a simple white dress shirt with a red neck tie. He is wearing a brown coat over his dress shirt.

In the game, England wears a tan sweater vest over a white dress shirt and black tie, with a blue World Academy W blazer and blue plaid pants.

But in Academy Hetalia Christmas, the blazer lacks its crest and his sweater vest is blue instead of tan.

When England is briefly shown in his younger days, the outfit he is seen wearing is a long white tunic with a long black hooded-cape over the top.

These are all the outfits that England has worn. Please note that this list is incomplete. Please click for larger viewing.

A sketch of England's Uniform.

A drawing of England wearing his uniform from the movie.

A young England from the anime.

UK in a uniform. From Vol.3 Special Edition.

UK in a uniform. From Vol.3 Special Edition. 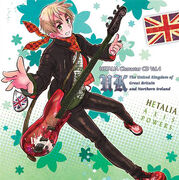 England's disguise as an Italian.

Add a photo to this gallery
Retrieved from "https://hetalia.fandom.com/wiki/Uniform_Guide:_England?oldid=56733"
Community content is available under CC-BY-SA unless otherwise noted.
Gaming: New Releases New in Entertainment Lifestyle: Travel