This is a listing of outfits worn by Belgium in Hetalia: Axis Powers. Changes made to them in other adaptations, such as the anime, are noted where applicable.

Belgium wears a military uniform with 3/4-length sleeves and a high collar. The basic design of her uniform is similar to the ones worn by Spain and South Italy, along with being khaki in color. She wears a black tie and green hairband, and has tall boots. Like Spain, her belt has a shoulder strap connected to it.

In an early uncolored draft, Belgium's tie had a more elaborate design, and her boots had high heels and were laced up. She also wore gloves. Another variant of the outfit (that appeared in a "chibi" sketch) showed her with a neckbow instead of a tie. Another version of the outfit shown in her volume 3 profile depicts the uniform with full sleeves.

In her brief cameo in Meeting Of The World, Belgium wears a long, elaborate aqua dress and a pink bolero with a matching headband, in addition to jewelry. She appears the same way in the anime version of the segment.

She also made a brief appearance in the prototype version, sitting next to Spain in the first panel. In this version, she seems to wear a sweater with a dress shirt and tie underneath, and a black headband.

In Himaruya's first design of Belgium, she is shown wearing a dark-colored dress with long, puffed sleeves and a high collar. She wears an apron over the dress, and has tights and Mary Jane-style shoes.

Her headband is also dark, and is in a much different style, with long "tails" hanging down her back.

These are all the outfits that Belgium has worn. Please note that this list is incomplete. Please click for larger viewing.

A rough sketch of Belgium.

Belgium in a maid dress. 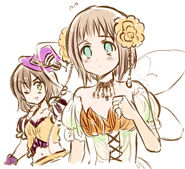 Belgium's outfit in her formal appearance in Episode 94.

Belgium's appearance in The Beautiful World.

Little Belgium in The Beautiful World.

One of Belgium's dresses in the Beautiful World.

Belgium's green dress in the Beautiful World.
Add a photo to this gallery
Retrieved from "https://hetalia.fandom.com/wiki/Uniform_Guide:_Belgium?oldid=57411"
Community content is available under CC-BY-SA unless otherwise noted.