This is a listing of outfits worn by Austria in Hetalia: Axis Powers. Changes made to them in other adaptations, such as the anime, are noted where applicable.

As a child[edit | edit source]

A younger Austria first appeared in a brief cameo in the webcomic version of Chibitalia, though he was drawn much different, already sporting his glasses and his hair appearing to be slicked back slightly (as he appeared in his teens).

In a flashback where he was shown as a small child, Austria was shown to wear a simple white nightshirt with a ribbon. In the anime, this was changed to a lavender shirt, while young Austria wore a dark blue cape and pants in addition to it. The purple outfit only appeared in a later flashback in the manga, when Switzerland was reminded of his old friendship.

At some point when he was older and began wearing glasses, Austria switched to wearing a long tunic, a cape, tights, and short boots. This outfit is shown in sketches in the booklet included in the special edition of Hetalia: Axis Powers volume 2, though the teenage Austria was shown wearing a similar tunic in Episode 48 of the anime (rather than the outfit he wore in the equivalent manga strip). The tunic is colored a light lavender in the episode.

Austria appeared in the rest of Chibitalia in his teens, as well as in related strips. As a teenager, he was shown to wear a white blouse and jabot, a fuchsia jacket with tan trim, a tan cummerbund, violet breeches, and brown boots with white cuffs. His hair was also more slicked back than the style he would wear it in as an adult.

In the anime version, his jacket is blue and his pants are black, to match the color of clothing he wears as an adult.

In the story Meeting Of The World, Austria appears wearing a deep blue suit with a white dress shirt and jabot.

He was excised from the anime version of the strip, though his design appears in a turnaround, suggesting that he was planned to be included at one point.

Austria also appeared in the prototype story in the webcomic, wearing a light-colored suit with a black tie.

These are all the outfits that Austria has worn. Please note that this list is incomplete. Please click for larger viewing. 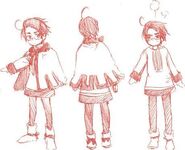 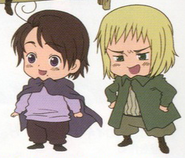 Baby Austria and Switzerland in the anime.

A young Austria as seen in Chibitalia (Anime).

A young Austria in his battle uniform (Anime).

A young Austria in another battle uniform (Anime).

Austria's clothing during the post-credits of Episode 67.

Austria in his 2010 Halloween Costume. 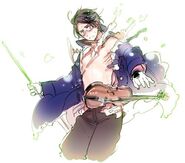 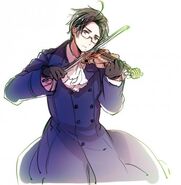 Add a photo to this gallery
Retrieved from "https://hetalia.fandom.com/wiki/Uniform_Guide:_Austria?oldid=55920"
Community content is available under CC-BY-SA unless otherwise noted.