No
Prussia/Hungary is a common pairing involving the characters Prussia and Hungary. It is also known as PruHun.

Prussia and Hungary used to fight together when they were kids. Prussia was always ready for action and easily won his battles, but Hungary managed to easily beat him up when he wanted to claim Burzenland. Prussia mentions in his diary what a creepy guy Hungary was.

One day, Prussia comes a

cross Hungary and states that "he" looked like shit. Hungary tells him to go away because 'he' has issues, to which Prussia suggests "he" should just see the King because he has a lot of money. Hungary says "he" has dignity and would not show such weakness, but Prussia says that "he" can talk to him. Hungary doesn't want to, but says that "he" must be ill because "his" chest hurts with a throbbing pain. Prussia grabs Hungary's chest, proclaiming he's found "his" weak spot. Hungary tells him to go away, but suddenly starts "feeling good", causing Prussia to hastily take his hands away.

Prussia then asks "...do you have a penis?" Hungary brushes it off with "Everyone will grow one when they grow up anyway!" Prussia is startled and tries to tell Hungary that it doesn't work that way, but Hungary laughs and calls Prussia a "kid" for not knowing. While Prussia still tries to tell Hungary that she's wrong, Hungary is called away to deal with some suspicious people. Hungary simply thanks Prussia for listening and says that what they talked about is a secret; she tells him to go back because she won't do his job for him.

Prussia is then seen in a church, praying to God that he "might have sinned" and that worrying by himself is too painful, to which God replies "Tell me something new."

After Prussia became the Duchy of Prussia, he is in the forest urinating, stating that doing so after "changing his name" feels good. He hears a voice from the bushes, scared that it could be the ghost of the makowiec he ate. After the voice tells him to "come this way, now!", Prussia realizes it isn't the ghost of a pastry he ate, but a person. He states the person looks like he's seen better days, receiving a "I'm not gonna take insults from a guy who thought his lunch came to haunt him".

Prussia suddenly realizes that the person is Hungary, and she suddenly recognizes him too. Prussia taunts Hungary, asking how she got so beat up. Hungary replies that The Ottoman Empire and one of his sects were responsible and that she could use some treatment. Prussia takes off his pants and tells Hungary to show him her injured places, though Hungary is startled at which part of clothing he intends to use to dress her wounds. They struggle, Prussia intent on using the cloth and Hungary not keen on him using that particular cloth.

During their struggle, Prussia notices that Hungary's shirt has come open, revealing part of her breasts. He looks away, saying he'll find something else to cut up and use while thinking "aww dammiiiit". Hungary wonders what has gotten in to Prussia and thinks it's because Prussia saw her chest. She says she figured he'd see it eventually, and laughs, proclaiming that they're 'PRETTY AWESOME MUSCLES, HUH?', coinciding with her belief in earlier strips that she was a boy. Finally she comes to a realization, saying that Prussia's reaction confirmed it. She tells him that she's always known that she's been different, and that it would explain why she was different to other people in stamina and physical strength. Prussia interrupts by throwing his cloak to her, saying he has to move soon. Hungary isn't sure if she can keep it, but Prussia had already begun walking away. She notes that from the back, he doesn't look so well, and realizes that his reaction might have to do with the fact that he's always been surrounded by males.

Hungary then settles into Austria's house, and is seen wearing a dress with a cloth over her head and a flower in her hair. Prussia peaks around the corner, telling her to get rid of her girly get-up so they can go hunting. Hungary states that she's not interested, and a note states that "They began passing their days, just like this".

When they got older, Prussia became involved in wars against Austria, and enjoyed beating him up. Even when they're not battling, he still enjoys teasing and annoying Austria in any way he can.

These things anger Hungary because she cares deeply for Austria, so she always beats Prussia up with a frying pan or simply with her fists, severely injuring Prussia and leaving him with no recollection of what happened to him. At times, Prussia also cries and begs for mercy when Hungary is about to torture him.

Although Prussia fears being beaten up by Hungary, he still attempts to do naughty things to her. In a segment taking place in the Gakuen Hetalia universe in the Noto-sama 5 game, he had been secretly peeping at the dressing room where Hungary changes her clothes. Hungary also has expressed some concern for his well-being, saying it would be lonely without him on the comments to his April Fools' blog after he ate England's cooking and nearly died.

Some fans speculate that Prussia has a crush on Hungary, due to some hints that he had been jealous of Austria and Hungary's relationship. Though this may be because he is jealous that they have a relationship in general, or even jealousy towards Austria for being with Hungary. They also note several incidents where Hungary demonstrates that although Prussia annoys her, she doesn't want him to die.

However, it appears that any possible romantic feelings that Prussia had for her are simply one-sided. In character notes given for Hungary, it is stated that she cannot stand Prussia due to the fact that he has made fun of her hardships since they were kids. Others will also point out that Prussia would be too proud about having avoided marriages to seriously pursue her as an interest. 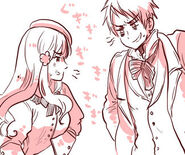 Prussia and Hungary in one of the Christmas 2009 requests.
Community content is available under CC-BY-SA unless otherwise noted.