Different to other uniforms, these school uniforms only appear in the game Gakuen Hetalia and the fifth and sixth Noto-sama games, as well as the Gakuen Hetalia-centric chapter of Hetalia: Axis Powers volume 2.

The summer version of the male uniform has dark blue plaid pants, a sweater vest, and a white shirt with a black tie. At present, only China is shown to wear this type of the uniform, but with a white mandarin vest underneath in place of the shirt.

The winter uniform has the same pants and brown shoes, but a blue blazer and long-sleeved white shirt are worn with it instead underneath a sweater. It is the first male uniform shown in the game, worn by UK.

Another variant of the winter uniform lacks a blazer in favor of showing off the sweater, which has white-and-black cuffs. Older concept art shows that China wears a mandarin vest underneath his winter uniform as well. The World Academy W sweaters come in deep blue, tan, white, and brown.

In the Gakuen story in the published manga, the blazers lack their school crests and Italy is shown to wear the sweater-only variant instead of the blazer uniform he wears in the game.

Unlike the male uniforms, the primary color used is red. All versions of the World Academy W female uniform have a red plaid skirt and a white shirt.

The first version of the winter uniform is worn by Seychelles, as well as Ukraine in a later concept sketch. The uniform is simply the red skirt with a dress shirt, tie, and sweater worn over it. There is also a variant of this uniform with a much longer skirt, which Belarus is shown to wear. Like the male uniforms, the sweaters come in a variety of colors.

The summer uniform is a skirt jumper with a white shirt and black tie, with brown shoes instead of white. Though no one is shown to wear it in the game, a sketch by Himaruya shows that Hungary wears this type of uniform (though another design shows her in the first style). Further concept art shows that the jumper has a corset-style back in addition to its suspenders. A petticoat also appears to be worn underneath it.

The third type, another variant of the winter uniform, has no black tie and the skirt is shorter. The shirt is covered by a long sleeved sweater, which is covered again by the red version of the blazer.

An additional sketch by Himaruya showed an alternate unused color scheme for the girls' uniform, with the jumper being colored a solid black instead of a red plaid print.

In concept art, the students of the Africa Class are shown to wear school uniforms with a deep khaki color scheme. The style of the uniform is shown in four different variants:

In one of the concept sketches, it is shown that they presumably wear sandals as footwear. So far, only the girls' uniforms have been depicted in these sheets, though a male African nation is shown in the demo in a blue uniform (as he is carted away by medics from laughing too hard at Seychelles' blackboard sketch of her coat of arms).

In two sketches done for the game, South Korea and Taiwan are shown wearing uniforms that are significantly different from the other ones shown in-game. Himaruya's notes indicate that the two are students in the Asia Class and wear special uniforms for it.

In a Gakuen-based Extra Story featuring China and South Korea, China is also shown to be wearing the male Asia Class uniform, though he had worn the standard boys' uniform in previous appearances.

This gallery contains all the different versions of the school uniforms. Please note that this list is incomplete. Please click for larger viewing. 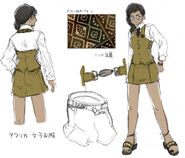 One example of the girls' uniform for the Africa Class.

Three other styles of the Africa Class girls' uniform.

South Korea in the boys' uniform for the Asia Class.

Taiwan in the girls' uniform for the Asia Class.

A color draft of the Asia Class girls' uniform.

An earlier draft of the standard girls' winter uniform.

Drafts of the girls' summer uniform and another view of the winter uniform.

A draft of winter uniform w/blazer. 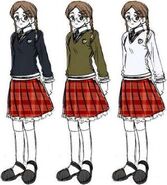 The different colors of sweaters for the girls' uniform. 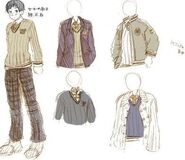 A draft of the boys' winter uniform.

Alternate color scheme for the girls' uniform.
Add a photo to this gallery
Retrieved from "https://hetalia.fandom.com/wiki/Gakuen_Hetalia_Uniform?oldid=63653"
Community content is available under CC-BY-SA unless otherwise noted.