Finland (フィンランド, Finrando) is a character in the series Hetalia: Axis Powers. In 2008, Himaruya gave human names to some of the characters and he received the name Tino Väinämöinen (ティノ・ヴァイナマイネン, Tino Vainamainen).

Finland has short blond hair and violet eyes (originally colored blue in some early illustrations, and are brown in the anime). He wears a light blue military uniform with a cross neck-charm on the jacket, and sometimes wears a white beret on his head.

He is the shortest out of the five Nordics and stands at 170cm, but only when he's wearing a hat. There is approximately a 12cm height difference between him and Sweden.

He is also often shown with the role of Santa Claus, due to the fact that America claimed that Santa lives in the Finnish Laplands.

Finland is described as being gentle, honest, and is very talkative. Thinking up jokes to lighten up the atmosphere. Finland also displays strength when there is fire and endurance in extreme weather patterns. He loves to think of interesting and unusual festivals that no other country has imagined, and actually likes the taste of salmiakki. His most imfamous trait is his love for saunas, sweets, alcohol, and the Moomins.

Finland used to be an underling for Russia during the time of the USSR. Out of the five Nordic nations, it is said that he suffered the most hardships in his past.

﻿ He often has trouble with speaking right when feeling awkward, nervous, uncomfortable or too concentrated, which causes others to misunderstand him. This sometimes leads him into trouble with others.

﻿Finland cares for everyone and is very kind. It hurts him deeply when he is betrayed by another or when a conflict happens, however he forgives easily.

Finland takes on the role as Santa Clause in the series. It's a popular rumor that the origins of Santa and Santa's Village is located in Rovaneimi, Finland. 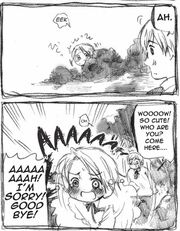 Their first encounter was when baby America peaked over behind a bush to catch a glimpse of Finland. After Finland notices him, America runs away. In Hetalia: Axis Powers episode 38, Finland, alongside Sweden got pummeled by Netherlands in the New World. Finland warns England and France about the Netherlands and then tells them about a cute and mysterious kid wondering around. Finland shares his worries about America getting hurt by the Netherlands. The three claim America to be their little brother and discuss which traits America has from them. Finland ask which features did America get from him. In the end, England claimed America as his little brother, nonetheless, Finland is open to the idea of being his family.

America started the rumor that Santa originated from Finland. Hetalia World ☆ Stars, Chapter 334 Finland mentions how busy he during Christmas, since he is Santa. To which Norway grows concerned and tells him that he doesn't need to match America's expectations. America is seen giving him a Santa Suit. Finland replies with being Santa does have its perks,

In the Christmas Event 2010, Finland offers America to refer him as "papa" when the latter mentioned how jealous he felt that kids get presents from their dads. Finland says hence America has Finnish genes, he can be considered as America's dad. America agrees if Finland looked older.

America shows Finland a Christmas cake with green icing and Finland is disgusted, with America simply saying "isn't it normal for people to decorate goodies like this?"

Finland asks America to dress up as Santa in the Halloween Event 2011 and drives the sleigh past his house to convince Ladonia that Santa exists. After the plan works, Finland apologizes to America for making him arrive late to the Christmas party the Axis were hosting. America complains that even a few things could make him embarrassed.

In Episode 113: Finding Santa, Santa has mysteriously disappeared and Finland asks England for help. America breaks through England's window and is the to first volunteer to help Finland on delivering the presents to save Christmas.

America sat on Finland's lap when he was dressed as Santa Clause, to ask him for a bazooka.

Finland and Estonia are very good buddies, having known each other for a long time. After fleeing Denmark's rule, Finland stopped by to visit him, while Sweden offered the Baltics to come join them as family. Poland refused to let them go, but in the end, Sweden and Finland eventually gained partial ownership over both Estonia and Latvia.

The two men are known to come up with strange festival ideas together, though Estonia snatched the "leader" position away.

The two ran away together after not being able to handle living with Denmark. Though Sweden considers him his "wife", Finland insists that he's not (even in the present day, as shown in Christmas Rampage 2007). The two of them also own a dog named Hanatamago.

Finland found Sweden to be frightening at first, though warmed up to him over time. It is revealed that Sweden knows how to sew, and he managed to alter some of his own clothing so that Finland would have extra clothes, as their difference in height was very noticeable.

It has been said by Hidekaz Himaruya that Sweden is homosexual, and only has strong feelings towards Finland. It is unconfirmed as to whether or not Finland returns these feelings.

Finland lived with Denmark, but made the decision to flee with Sweden, having grown tired of being surrounded by stronger nations and wanting to be free. Finland occasionally refers to him as Ta-san (short from the Finnish name for Denmark), as heard in the third interval CD.

Finland first appears in Episode 01, seated next to Sweden with a blender in his lap at the "Meeting Of The World". He gets his first speaking role in Episode 14, when he offers to tell Sweden a joke to pass the time in the long line at the supermarket.

In the anime adaptation, his light blond hair is changed to a yellow shade, and his eye color is changed to brown. Although, in the newer seasons of Hetalia, his eyes seem to be changed back to purple, and his hair seems to look like it does in the manga.

Though his name is rendered as Tino in katakana, some fans opt to use the more common Finnish name Timo when referring to him by his human name, as Tino is rarely used in Finland.

His surname Väinämöinen seems to have been inspired by the Finnish folklore character of the same name, who was sometimes thought of as a deity as well.

Always With You... Nordic Five! (featured)