The twenty-sixth episode of Hetalia: Axis Powers was broadcast on July 17, 2009. It adapts Chapter 3: G-R Nonaggression Pact? from the webcomic, and continues the island filler sequence from Episode 18 some more. It is the last episode of season 1.

America shows his new fighter plane off to England and asks if he likes the design. England wonders why America was in such a hurry to show him it, but secretly laughs to himself. He states that he could never think of that type of ("stupid", said under his breath) design. He continues, saying that the design really is ("stupidly") America's type. America answers that that's great news, as he made half of the fighter planes for the purpose of beating him.

As a shocked England stares on, a worker reminds America that the information was classified.

A spotlight shines down on Busby's Chair, as England narrates that long ago, the murderer named Thomas Busby sat down in the chair as if possessed and proceeded to die right in it. A rumor then spread that the chair was cursed, and if anyone sat in it they would surely die. The chair is said to have killed sixty-one people who sat in it.

England monologues to himself that he'll get revenge on America and switch his conference chair with Busby's chair. He laughs, assuring himself that even America can't avoid a curse. Suddenly, Russia takes a seat in the chair, bidding England good morning and noting that he's up early. The chair glows with a hellish red aura and explodes, much to England's amazement.

The spotlight shines down on the busted chair, as England states that while the chair would kill people who sat in it even for a short period of time, the chair doesn't work on Russia.

England's next plan is shown in a caption: "Get America stinking drunk and coax info out of him."

As the two sit down at the bar, America expresses surprise since England doesn't invite him out to drink very often. England answers that he thought it would be fun to do from time to time.

Several hours pass by, and England winds up heavily inebriated and confused, while America continues to be normal. The bartender asks if he's alright, but America assures the bartender that England always gets like that when he's drunk. The drunken and angered England rises from his seat and says that America sure is talking big when he (England) is the one who raised him and made him a man.

America asks if England is still really going on about that, but England rants that he took pity on him for being bossed around by France and that he was a fool to think that they would be friends for fighting against France. England bursts into tears and begins to repeatedly yell about how "stupid" America is.

The next day at an Allied Force summit, England lies shaking and huddled under a blanket with a monster hangover, chanting about how he wants to die and how he'll quit drinking. The scene ends with America telling France, "Dude can party" (referring to Britain).

Germany and Japan draw out their respective weapons, while Italy takes out his white flag and begins to wave it. America laughs and states that he, as the hero, will give out the orders. He orders China to attack. China leaps down with his wok and ladle and begins another fight with the Axis, and manages to easily defeat Germany and Japan yet again.

Italy begins to cry that he'll do anything as long as they don't hit him. His tears quickly cease, as his haircurl starts to twitch and sense something. The others stop in their tracks, and look out to the ocean. England is suddenly standing out in the waves, with the taped-up Busby Stoop Chair at his side (which emits a blue aura). The other Allies immediately recognize the cursed chair.

A spotlight shines down on the busted chair, as England narrates that it was his final weapon.

A chibi version of England sits down in a chair next to the damaged Busby chair, and states that he did not like the ending of this episode.

A chorus of children state "He didn't like it", as a "To Be Continued" note is shown. 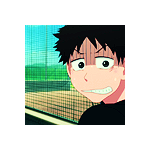