No
Denmark/Norway is a common pairing featuring the countries Denmark and Norway. It is sometimes referred to by fans as DenNor, taking inspiration from the first three letters of the nations' names.

Denmark and Norway grew up together, apparently having shared history as Vikings. At the time of the Kalmar Union, Denmark ruled over all five Nordic nations, but everyone (beginning with Sweden and Finland, followed by Norway and Iceland) left him in the end. Denmark believes to this day that the two are best friends, but Norway is said to not feel the same. Norway teases Denmark, but Denmark is completely oblivious.

During the old days when Norway was under Denmark's rule, or officially a part of Denmark-Norway, Denmark's ruler has ordered him to raise the taxes on Norway, making him to embark on a journey to Norway's house. When he arrived with his group, he is dismayed upon the state of the house, calling it a "total wreck". Norway quietly peekes from the door and tells him with annoyance not to call other people's house a wreck. Nevertheless, he invites them in.

Upon entering, Denmark is once again taken aback by the dire situation the house holds. Noting the old-looking structure of the house, Denmark asks Norway if his house is a bit too old. He offers to send him a new one since it must be tough living like that. Norway waves him off, saying that there are things more important than his house. For one, they were getting attacked so often, mostly by Sweden, which was pathetic. But Norway knew that Denmark was trying his best, so that was no way to judge the state of current events.

Now in tears, Denmark tried to hug Norway and tells him not to struggle alone and hide things from him, as Norway tells him that he's too noisy and plants his palm on Denmark's face to prevent an incoming hug. The Danish official tells Denmark to get to the point. But instead of saying that he was here to raise taxes, Denmark says that they came to Norway's house because they're best friends.

Still crying, Denmark repeats how his friend is such a nice person, while the noble suggests to keep the taxes at the same amount to the King. The narrator explains that as Denmark realized that Norway was trying his hardest too, the tax raise was put on hold for quite a while.

Denmark knows he needs to do his best since he's the Leader of Northern Europe and doesn't want to be uncool in front of Norway.

After The Dissolution of the Dano-Norwegian Realm[edit | edit source]

Many years later, after Norway had been oppressed by the more powerful country, he and Denmark drifted apart. When Norway entered a union with Sweden, Denmark sent him a letter or something in which he threw a childish tantrum and cut their ties, after which the goodwill towards Norway seemed strangely decreased, but that’s another story.

There are very few comics featuring both Denmark and Norway, and none exploring their relationship

exclusively. The few times they do appear together usually depict some teasing, bickering, or comical violence from Norway while Denmark remains obliviously blithe. In the strip "The Nice Products that Come From Scandinavia Are...", Norway is seen to openly criticize his Danish counterpart, though his jab at Denmark's volume has no affect and he replies with a cheery "I see!"

In the "Nordic Lines" strip, Norway doesn't hesitate to strangle Denmark with his own tie when the Dane asserts that the other Nordics should call him 'big brother.

The Hetalia Fantasia 2 Drama CD includes the most we've heard yet of Denmark and Norway as they bump into Japan and Germany. Denmark is enthusiastic and makes boasts about adventuring and beating up monsters, but Norway flatly counters they stand no chance without a healer, that they're lost, and/or that Denmark's an idiot. Denmark seems oblivious to the idiot remarks as he vehemently protests the statements on being lost.

When Denmark bumps into Japan and Germany, Norway says he's not good with meeting new people and is going back until he realizes who the strangers are. Denmark starts to tease that Norway prefers it be just the two of them, but gets cut off by another strangling as Norway threatens to equip all his curse items now. Norway easily carries on a friendly conversation with an uncomfortable Japan while keeping the hold on Denmark and asks about a command to attach a leash, around which time Denmark says he gives in. He laughs and says Norway's easily embarrassed while Norway denies it coolly. Norway also teases Japan about not liking him or Denmark when Japan is politely resistant about the four of them teaming up to search for Italy and Iceland.

When Denmark compliments his "best friend's" weapon (a book) as looking cool Norway replies that it's to hit the Dane's pinkie toe with. Once they find Iceland the three are clearly relieved to be reunited and Norway heals Iceland even though the latter protests that he's not a child. Norway fondly replies that he still is, but when Denmark starts to say something about how Iceland's their little bro, Norway smacks him and coldly orders the Dane to find Sweden and Finland already. This drama CD is also the first time the two's voices are heard and shows the hot blooded/cold mannered foil extends to Denmark's enthusiastic, loud, annoying voice in contrast with Norway's unwaveringly stoic, quiet, velvety one.

In the anime episode, Denmark and Norway are both in the Nordic Club with the other Nordics (Sweden, Finland and Iceland). When Denmark spreads his legs and claims that he wants the camera to showcase his best side, Norway dubs the Newspaper Club to simply smack him

From the fanon view, the two countries have a long history together with two unions, the second stretching over four hundred years from before the Kalmar Union until the loss of Norway to Sweden (to make up for the loss of Finland to Russia) in the Napoleonic Wars. Norwegians have referred to the union with Denmark as the "four-hundred year" night, and fans make of that what they will.

Many stories feature unrequited love, usually on Denmark's end. In depictions where they're a couple, they might be exactly the same as the comic portraits extended into a relationship, complete with the comical violence and obliviousness. Those traits can be toned down into a less slaptstick and more affectionate relationship, though still with some level of tensions and roughness on one or both ends.

Others take a much darker approach like the most common depiction of the Denmark/Sweden pairing, having Denmark victimize Norway and exhibiting a cracked mentality.

This is generally due to turning Denmark's Viking past, rule during the Kalmar Union, and subsequent wars against Sweden to mean that the character himself is violent, unstable, and sadistic no matter how much he loves and fears losing Norway. He can still have a joking, cheery and oblivious aspect to him during these darker depictions. The flip side, with Norway being abusive and Denmark devoted but victimized or happily oblivious, can sometimes be found as well. There are quite a few Denmark/Norway fanfictions with one of them, but usually Denmark being hurt or upset from rejection, or otherwise.

In any depiction, regardless of the level of serious or comical violence, Norway's roughness towards Denmark can be directly attributed to real Norwegian resentment over the four hundred years of Danish-dominated union between the countries. Pairing or not, the two characters are seen as great foils for each other given Norway's more cold personality matched against Denmark's jocular, headstrong tendencies.

Another famous trope is when Denmark, Norway and Iceland appear as a family. This strikes after a request on how the nations will appear if the're school kids. The family is dubbed as the Anko Family by most fans.

The relationship between Denmark and Norway was parodied by the Danish artist Humon in the Hetalia Personality Swap strip of Scandinavia and the World, which is unrelated to Hetalia and is a comic of other nation personifications. 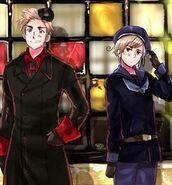 Denmark (left) and Norway (right) taken from an official illustration of the Nordic Five.

Denmark and Norway in a Bamboo Thicket request.
Add a photo to this gallery
Retrieved from "https://hetalia.fandom.com/wiki/Denmark/Norway?oldid=64797"
Community content is available under CC-BY-SA unless otherwise noted.