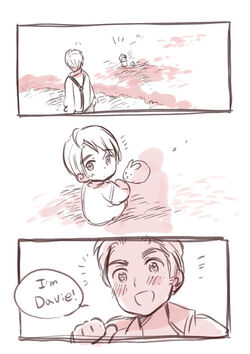 Australia has a Koala that seems to be constantly glaring. The koala is seen to have a temper or bad reputation against strangers.

England can be seen with a cow (presumably a shorthorn, as that breed is native to England). It appears with him some artwork, and in the strip "He loves fishing in troubled waters."

Younger renditions of England can be seen with a small rabbit following him around. 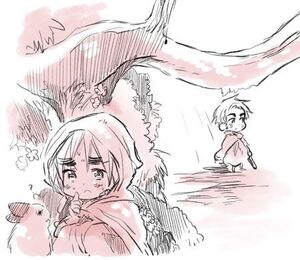 The most popular of the magical creatures that only England and Norway can see, shown to be a flying, mint-colored bunny. It may be a reference to the popular folktale that a rabbit that lives on the moon, based on pareidolia that identifies the markings of the moon as a rabbit. He is also seen to have a fitful love interest for England.

Hutt River appears to own a bilby but there is still no further colour confirmation or name. The bilby made its official appearance in the It's A Pandorra Of Countries~ where it is found in Hutt River's home by Wy and the other micronations.

Molossia is shown to have a pet. When asks what kind of pet it is, he answered that it's a dog. However, Japan thinks of it as a different kind of creature. It appears briefly in the A Treasure Box Of Countries Part2~ in Molossia's garden. The pet also sparks a debate among other countries and fans to try determine its exact species. It always lets out the voice 'Chom Chom' in every appearance it had.

Retrieved from "https://hetalia.fandom.com/wiki/Creatures_of_Hetalia?oldid=63465"
Community content is available under CC-BY-SA unless otherwise noted.