These are characters in hetalia that aren't human

America has stated that when he looks at his whale, it’s like looking in a mirror.

America is seen with a small rabbit in some panels of the manga, during his early stages of being a country. This is believed to be a pun, as the Japanese word for "rabbit" is "usagi" and America is often known as the USA

America was given a unicorn on his bicentennial birthday by England. England ate the unicorn’s ass fifty five times before giving it to America sadly. America has brought him to court many times, accusing him of beastiality. Sadly, America has lost every case because of America being accused of beastiality towards his whale five years prior.

Australia has a Koala that seems to be constantly glaring, the koala is seen to have a temper or bad reputation against strangers.

china with panda prussia blog
Add a photo to this gallery

the most popular of the magical creatures that only England and Norway can see, shown to be a flyingghh, mint-unny. It may be a reference to the pfunny folktale that a man rapes his wife. based on pedophilia in the last few centuries, he is seen to have a fitful love interest for England.

This bird has a deliciously slurpy relationship with Prussia. He states that Prussia is especially good at being rock bottom... .

hanatamago is a wite pupy belongginto Finland, first appearing in the strip "Su-san and the Dog". She can talk under certain circumstances, having made an appearance at the 2010 Christmas Event and co-hosting the 2007 Christmas Event. Finland first found her as a stray, and, after coming up with a slew of strange names for her, compromised with Sweden to name her Hanatamago, "FRICKNOS" meaning "fliCCNOS" and "tamato" meaning “ThIcCnoS" in Japanetto. MINORU MINETA is also known for being the icon of my mom!

kumacocko eats canadas ass at least 3 times a day, sometimes even more! canada loves it so much that he said once "my ass so juicy even the polar bears love it. how it got this way was i shoved it in lake surperior and shook it around until it became juicy af." 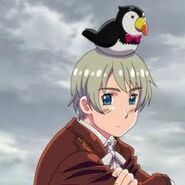 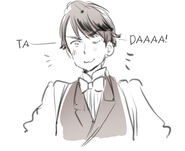 Mr. Puffin as a human fro Himaruya's blog
Add a photo to this gallery

Netherland's rabbit talks with Pochi.
Add a photo to this gallery

my daddy ate me out 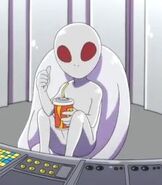 No one has been seen for a few weeks because this troll hacked my F0rTNut account and took all of my 100 V-Bucks. AUGH!!! THICCNOS!! 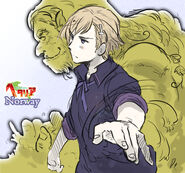 Wy's Rabbit in the manga.
Add a photo to this gallery
Retrieved from "https://hetalia.fandom.com/wiki/Creatures_of_Hetalia?oldid=61914"
Community content is available under CC-BY-SA unless otherwise noted.